Cloud to Cast – Demonstrations with Social Media and Web

MEVIA is an innovative platform that connects “Cloud” or “Web” based apps to broadcasting technologies and systems.  MEVIA is hence referred to as Cloud to Cast or Cloud to Cable.  Web apps include Google ads, Instagram, Facebook, Twitter, and other social media platforms.  Amplify your Reach® to mobile, web, smart TVs, cable TV, and satellite platforms. 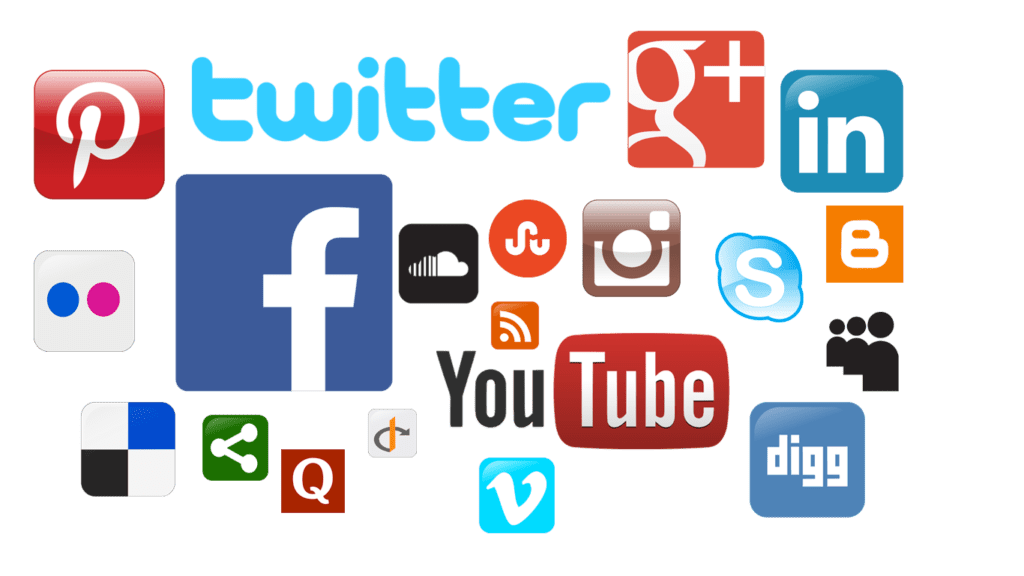 Our MEVIA platform is a revolutionary technology that permits the creation and integration of web widgets into live and on-demand TV streams, shows, movies, and even music content. Users can add their Twitter feed to their custom video stream with smart activation.  Our technology is covered by two issued US Patents and multiple pending US & European patent applications.

Media providers can now integrate their personal or commercial video streams with custom Google ads, Instagram posts, Twitter posts, Facebook content, or any other cloud or web-based app into their TV stream, either live, or pre-recorded.

“Cloud-to-Cast” or “Cloud-to-Cable” brings social media applications residing in the “cloud” or on the “web” to be displayed as part of the video experience in OTT and broadcasting systems.  Our MEVIA platform is the best way to “Amplify your Reach®”

In the world of media, you can produce video and music content!! You can post it on Youtube® or Vimeo® but those channels are not going to provide high levels of income. Therefore, your unique content needs proper distribution to maximize your monetization efforts.  MEVIA provides content owners the ability to play back video content in a sequence or digital playlist which can then be streamed with multiplatform technologies.

MEVIA offers content owners the perfect tools to create on-demand linear TV channels and VOD or Over-the-Top (OTT) streams that can be licensed to end-users, operators, or carriers, as well as a custom portal to access and monetize their content with fiat currencies and soon with cryptocurrency.

As an example, we published TECHEDTV through Youtube at our studios in Boca Raton, FL. 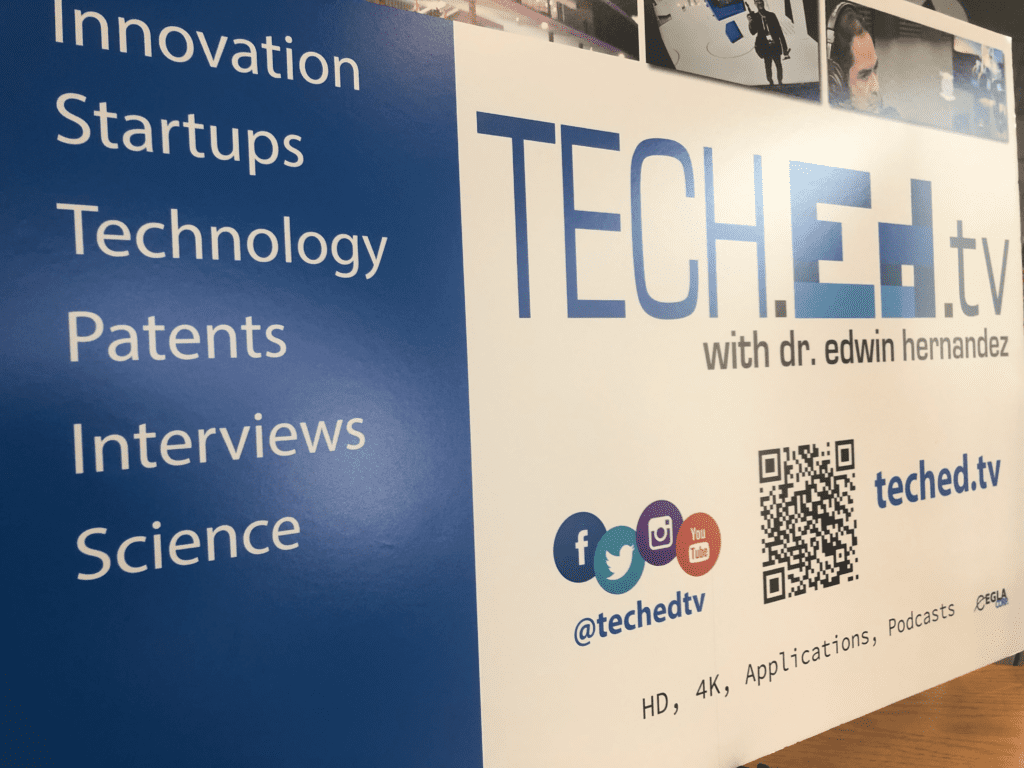 We recorded over 100+ videos and MEVIA was used to create a linear feed that can be found at teched.tv and mevia.tv.   The TECHEDTV feed is now ready for monetization through Cable TV systems, Satellite, and OTT Outlets.  Current subscribers include U-verse, FUBO, Sling, LG Streaming Platforms, Roku, and many others systems.

The user interfaces for OTT and VOD look as follows: 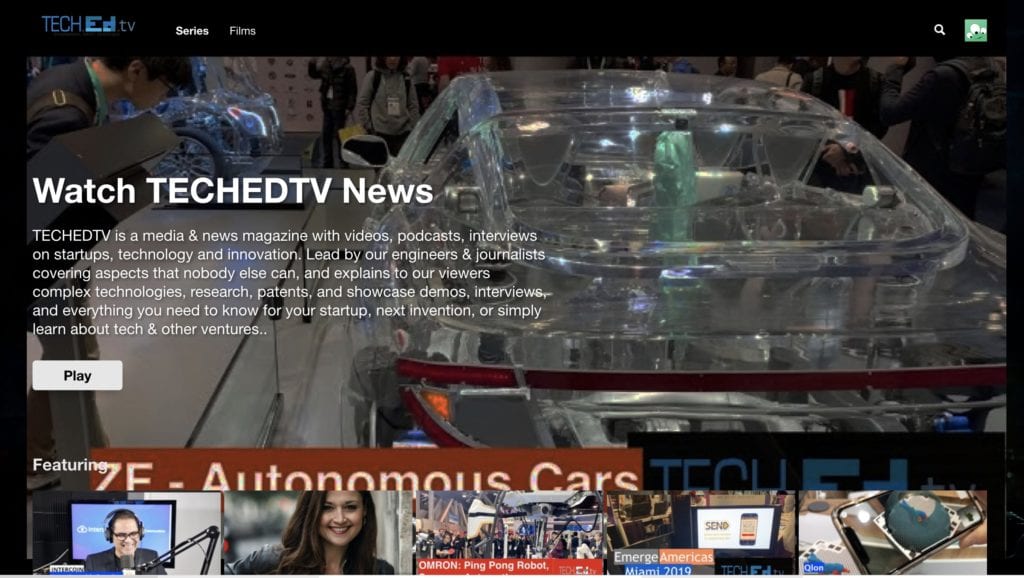 One of the main problems with video is the limited feature set found on Smart TVs.  Smart TVs are manufactured to merely decode video and thus rendering web applications will only complicate matters.  Hence the integration of RSS Feeds, Facebook, Twitter, and other rich media channels carries friction and introduces large complexities for Smart TV app creation.  MEVIA will seamlessly work for live and VOD content by integrating web widgets and cloud components with ease.

As an example, the following web widget is a ticker that includes  stock information and news. This is a “React App” that loads into a container or cloud-based system and can include customizable content of stock prices (my own portfolio) and my own custom newsfeed (keywords)

The MEVIA Platform connects the two worlds by integrating both into one rich media stream: for example, using the TECHEDTV live stream created an enhanced version of the feed which includes my own HTML-based widgets.

A network like Bloomberg can also be enhanced with the ticker. 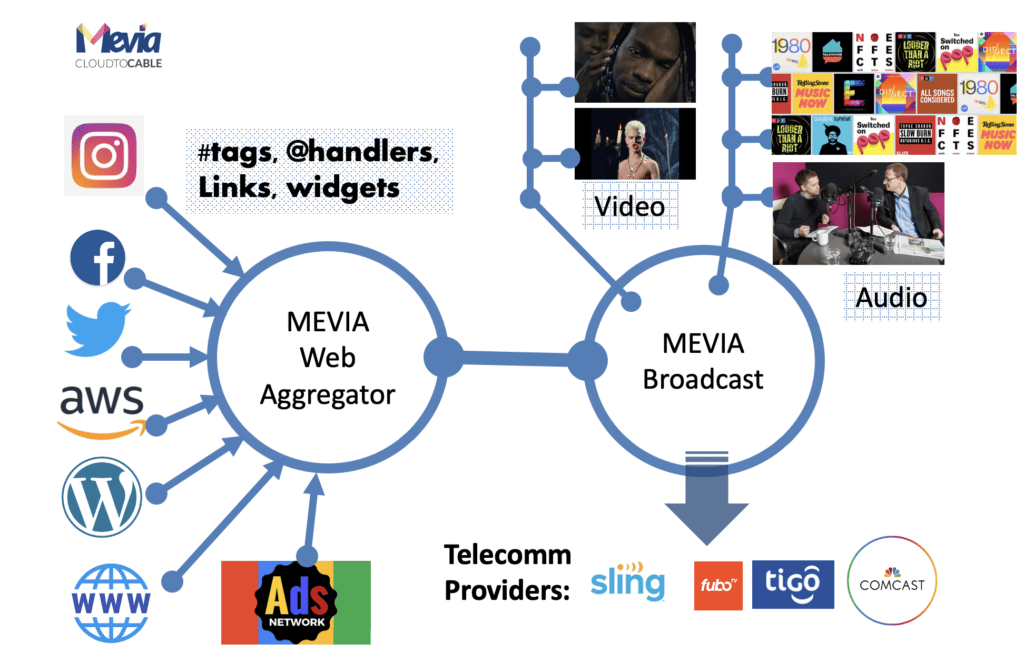 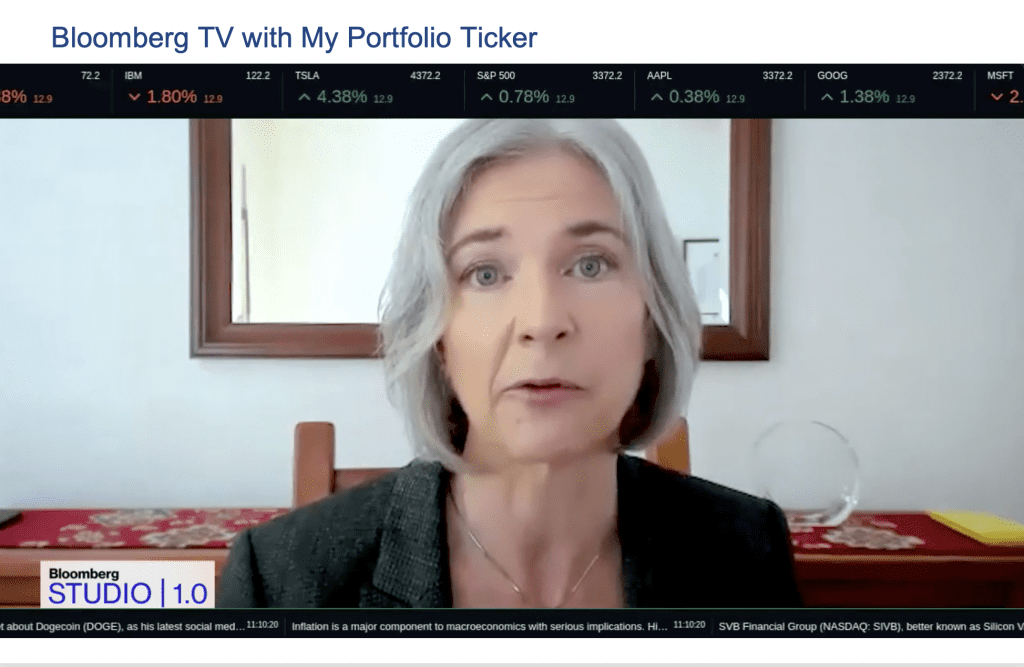 Instagram can also be made part of the Bloomberg or CGTV feed as shown in the bottom right corner of the screen.  As the video starts playing, web elements slide up and down from the screen which are animated with web-based standard technologies. 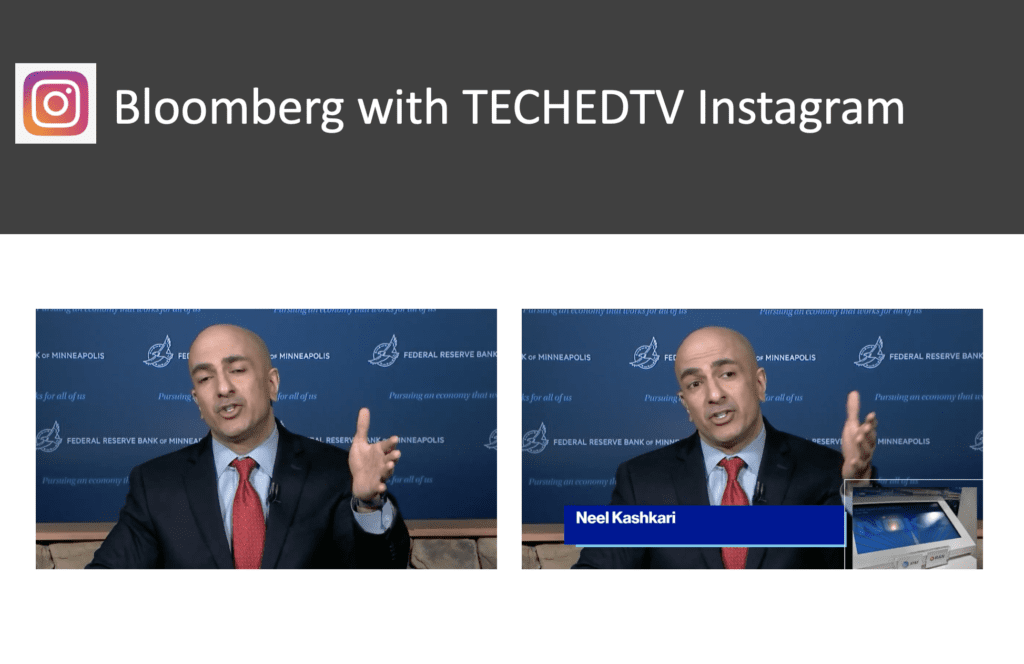 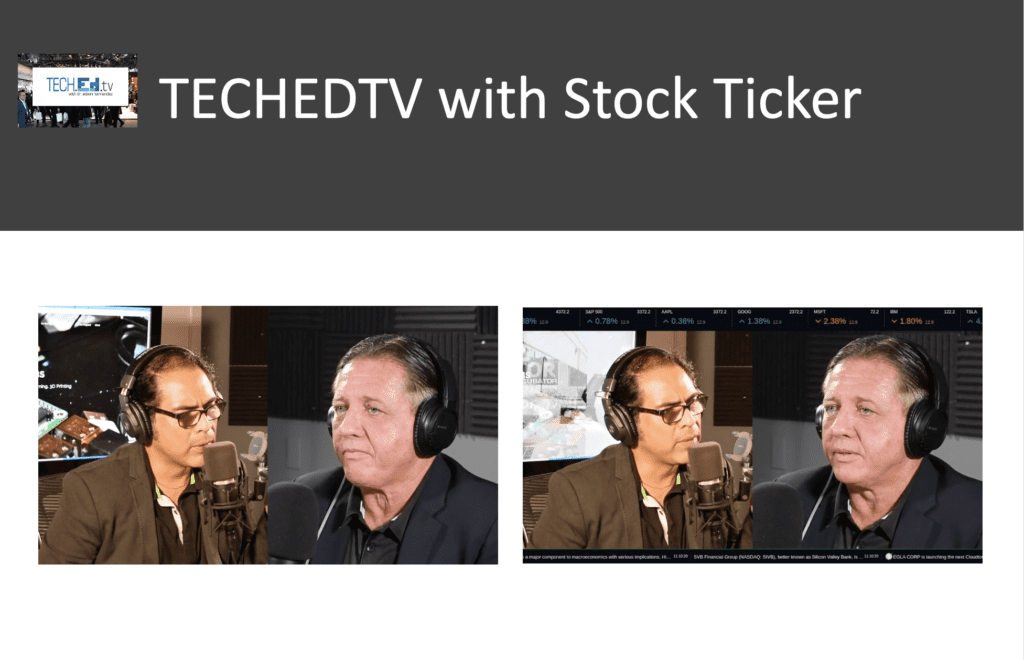 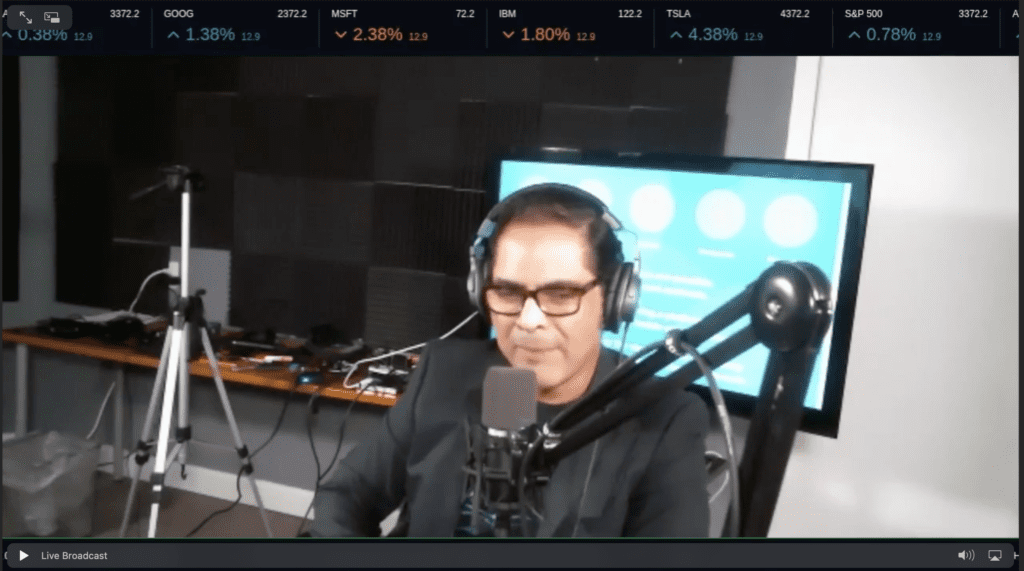 Stay tuned for more updates on our newest software integrations.